So, my lovelies, the next installment of my trip down birthday memory lane….I must say, out of all my birthdays, this was the most memorable. I’m not going to say best ever, because well, I figure that’s the sort of thing you can only truly say on your death-bed, right?

Anywho, a little scene setting. 2003, which is about three years into the 6 or so I worked for  McDonald’s. This was during the height of my socializing with colleagues, it was the ritual to go out every two weeks when you got paid on a Thursday. Hence it being a Thursday when my birthday was on a saturday, and of course normal logic would say that would be the night to go out. Which, I did as well, but more of that anon.

So, it was the night of well, that week at least. Now, I’m not the most popular of people, given that I’m socially awkward, and was even more so then….but I managed to get quite a turnout for my 21st, I guess it’s just that sort of birthday where people make an effort. So, I had friends from work, my memory serves me either rightly or wrongly that there were about 15 or so people out…and I know for definite that there are people not featured in the following pictures that were there, so I’m not going entirely mad! I do want to say that my sister and my friend Vickie was there, but I might be mixing this particular evening with one of the many, many other Thursdays….funny how alcohol and age makes you forgetful! But I do know for sure that my best friend Estelle was there, given that it was my birthday and all, but she’s not in any of the pictures…. 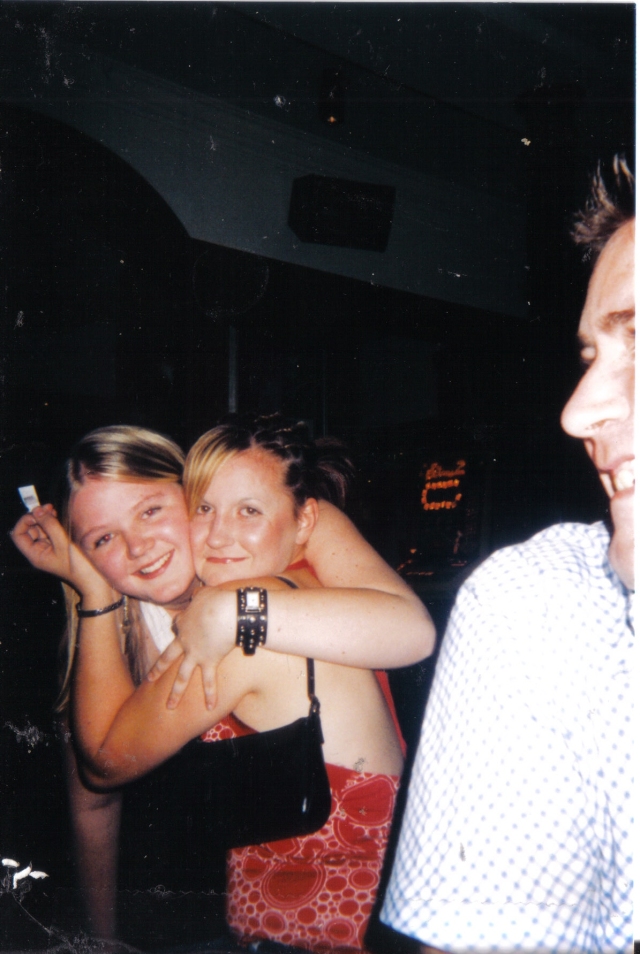 My sister Amelia pulling one of her photo faces….Sam Regulski….and no, that’s not someone random ruining the shot! But I am curious to whom took this badly shot picture….cant be Amelia as she’s actually in it! *hopes it wasnt her*

Graeme, with Gemma Naylor whom he was dating at the time, and then Donna Ingham, whom I’m pretty certain we had to all but carry home, lightweight! lol

Kev Martin…absolutely no idea why he’s got a pint in front of him…actually, it might be because he didn’t want his picture taken, might be mistaken. I think it was after this he started going out with Donna. Macs was, is and still will always be a bit of a sordid love-in with everyone getting together. Well, if you go out *a lot* with the people you work with, its bound to happen!!

Rob, Jess Bailey whom I’m about 40 percent sure got together with Rob that night, or certainly it was early days, Ben, Graeme and Gemma.

Ok, next picture….did debate not actually posting this one, but its the only one with me in it! Which I’m reckoning you folks might actually want to see one of me if you’re someone who wasnt there at the time, knows the people in question, or any other factor that might make it interesting for you to see pictures without me in it.

I’d also like to point out that these aren’t actually my pictures, they were taken by my sister, and belong to her, they are simply on loan. So anyone that might stumble upon this blog and start reading things into this next picture still being in my possession, well there’s no hidden meaning, Freud, it’s just what it is.

My 21st, as I’d previously said, was a pretty good birthday, at least as far as I can remember eight years later. It had that sort of sparkle a really happy/good day has, you know? And that’s because so many people turned up, nothing went wrong mostly, and it was just a good night. I probably should just stop waffling and admit that I had a humongous crush on the person about to appear in the picture with me, entirely unrequitedly. It’s probably the thing that for a few years afterwards I used as an excuse to not put myself out there, dating wise. It’s very, very easy to say that you’re hung up on someone you don’t really see anymore, at least it was for a while, simply because of the fact you can see them through rose-tinted glasses when they’re not present to shatter the illusion.

But, and I attribute this to not knowing that he was coming on this particular evening, that for me, and me alone of course because I’m pretty certain I was friend bordering on sister-like to him, there was this extra frisson of sparkly specialness….I mean, being older, wiser and more logical about long ago things, I’m pretty certain that for any still rather naive just about to turn 21-year-old, that has their crush show up and its their birthday so they’re being extra nice, it’s very, very easy to get carried away and think things that aren’t true. I’m pretty certain that was the case a lot of the time back then….that I saw things my way, rather than seeing the truth, because I’m that sort of person that gets carried away with a fantasy of how I’d like things to be, rather than how they really were. I’m sure that I probably owe an apology or two for being just a tad delusional about the status quo. Probably also owe an apology the bar person of the Ram back in the early noughties for drinking three tequilla shots in a row, then promptly throwing up on the bar somewhere roughly around the same time-ish!

I’ll finally point out that for the last while I’ve been on a massive retro/recollection trip of all things long gone, I think its my fastly encroaching the big 3-0, and my brain doing what American tv shows do when they cant be arsed to make a new programme and stick a load of clips together….otherwise known as a flashback episode….

Stuart Lowes, aforementioned crush object, and yours truly. I wasnt actually looking into the camera, I was looking away because someone somewhere called my name….couldnt have told you even then whom as I was pretty drunk by this juncture in the evening…as was many, many people….it got a little messy, if I’m recalling it right!

So, like I said before, my birthday was on a saturday, so I went out with Amelia and a few of her friends on the day of my actual birthday….went to The Works, Nottingham…and for reasons I know but wont disclose, upon meeting a total stranger that was someone with someone else that one or two of the people we were with knew, I promptly decided to snog said random guy for about four hours without stopping. Didnt then and dont now have the foggiest what he was called, and if I ran into said snogee, I’d not even know. Which probably doesn’t seem that dramatic, but I’m usually the sort of girl who fancies someone for ages and never even tells them or make any move on them whatsoever, so that was pretty out there for me. Not my finest hour! 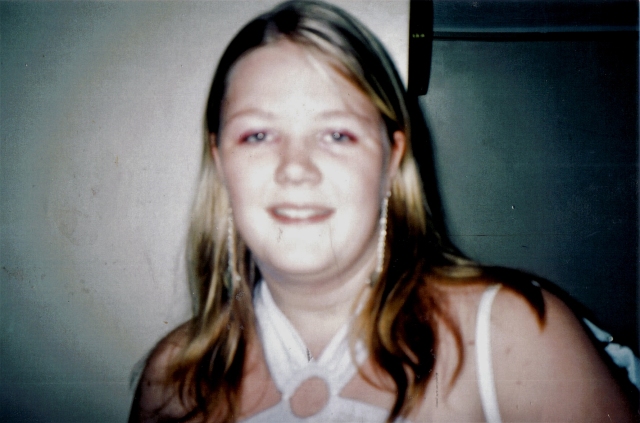 so, the only photo in existence of that evening, one of Amelia, looking delightfully chavvy! I promise that look was all the rage back in 2003!

So, that was my 21st birthday….the memory of the evening is a little bit like these pictures, faded around the edges, but netherless, it’s still one that ranks up there with good birthdays so far. Another memorable one tomorrow, albeit from considerably earlier in my lifetime!

2 thoughts on “Birthday Reflections: My 21st”

Latest on Scribblings of a Confused Brit Girl